Mapping Food Insecurity in the UK

You are here: Home1 / N/LAB Projects2 / Mapping Food Insecurity in the UK

Remarkably, despite being the 5th wealthiest country in the world, the UK is having vast amounts of food-waste, at the same time as seeing increasing levels of food-insecurity. Food-insecurity, in particular, is made worse by the lack of large-scale longitudinal government statistics without which interventions are occurring in the dark.

In response to this, N/LAB has worked with food-sharing app OLIO, to develop AI to build the first-ever-data-driven food-insecurity map for the UK.

The ongoing COVID-19 pandemic has further disrupted people’s access to a healthful diet, while the lack of real-time and longitudinal data about the prevalence of food-insecurity has made it even more challenging for local authorities to act.

Despite being the 5th wealthiest country in the world, the UK is experiencing increasing levels of food-insecurity.

In this programme of work at N/LAB, we examined the relationship between food sharing and deprivation generally. We then developed a machine learning model that could accurately estimate food-insecurity based upon aggregated food seeking behaviours by OLIO users in the UK. We found that data from food sharing systems such as OLIO’s can help quantify a previously hidden aspect of deprivation; with collaboration from Greater London Assembly, we also developed a proof-of-concept map to help policymakers, local authorities, and social scientists monitor, evaluate, and intervene, to reduce the burden of hunger. 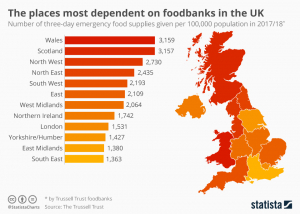 The places most dependent on foodbanks in the UK (Armstrong, 2018)

Our work addressing the issue of food-insecurity in the UK was initiated in 2019 as part of a Knowledge Transfer Partnership with OLIO. With more than 3 million users, OLIO is an app that connects neighbours with each other, and with local businesses, so surplus food can be shared, not thrown away.  In 2020, a a proof-of-concept food-insecurity predictive model and map covering all LSOA’s across the UK was developed. In 2021 a pilot was undertaken with Havering Borough Council in London, as part of an Innovate UK Sustainable Innovation Fund, producing the first data-driven map of food-insecurity to be used in real-world practice.

OLIO was founded in 2015 by Tessa Clarke and Sasha Celestial-One. OLIO provides a service that connects neighbours with each other and with local businesses so surplus food can be shared, not thrown away. Those donating surplus food can be individuals or companies such as food retailers, restaurants, corporate canteens, food photographers, etc., and donations can take place on an ad-hoc or recurrent basis. For example, some supermarket chains in the UK, including Tesco, the Midcounties Co-operative, Morrisons and Sainsbury’s have piloted OLIO as an ‘online food bank’ to donate food and to reduce their waste. As of April 2021, it is the most popular service of its kind, with more than 3.6 million users and 17.8 million portions of food shared worldwide.

This project was partly supported by Innovate UK’s, Knowledge Transfer Partnership (KTP) scheme, which aims to help businesses in the UK to innovate and grow. It does this by linking them with an academic or research organisation and a graduate, enabling a business to bring in new skills and the latest academic thinking to deliver a specific, strategic innovation project through a knowledge-based partnership.

The academic partner (known as the Knowledge Base), in this case N/LAB, helped to develop this project, providing academic input and recruiting the ‘ideal’ graduate, known as an associate. University of Nottingham acts as the employer of the associate, who then works at the business for the majority of the project, to co-create innovative new developments.

The scheme can last between 12 and 36 months, depending on what the project is and the needs of the business.

Our food-insecurity model was developed based upon fine-grained and anonymised proprietary data from OLIO, following three key steps:

Our approach is summarised in the diagram below: With high levels of precision and recall, our models suggest that about 5% of OLIO’s users in the UK are experiencing food-insecurity. Those most in need also live in areas affected by health and education deprivation, and are characterised by a particular profile of network usage. They are not sharers on the whole; they are takers; reciprocity is largely absent; there is also a dependency effect within the network, with recipients in acute need relying on the highly active community of volunteers prepared to travel to enable re-distribution.

Our initial prototype produced in 2021 with Havering Borough Council is live and being used to inform interventions for addressing food-insecurity. With increased interest from councils across the UK, the ambition going forward is to develop a nation-wide food-insecurity map to help policymakers, local authorities, and social scientists monitor, evaluate, and intervene, to reduce the burden of hunger.

Identifying food insecurity via food sharing networks and machine learning
Food insecurity in the UK has captured public attention. However, estimates of its prevalence are deeply contentious. The lack of precision on the volume of emergency food assistance currently provided to those in need is made even more ambiguous due to increasing use of peer-to-peer food sharing systems… [more]

Food sharing, redistribution & waste reduction via mobile apps
Food sharing mobile applications are becoming increasingly popular, but little is known about the new social configurations of people using them, particularly those applications that use consumers as voluntary intermediaries in supply chains. This article presents a social network analysis of… [more]

Prosocial Exchange Systems: Nonreciprocal giving, lending, and skill-sharing
Prosocial exchange systems support cooperation and exchange in support of more sustainable forms of consumption. While often assumed that exchanges within such systems are reciprocal, it remains unproven as to what extent reciprocity occurs… [more]

Reforming the Modelling and Prediction of Food Insecurity in the UK via Machine Learning and Food Sharing Networks
Food insecurity is a persistent problem in the UK. Due to logistical challenges, national food insecurity statistics are unmeasured by government bodies – and this lack of data leads to any local estimates that do exist being routinely questioned by policymakers…. [more]

Protected: AI for Perinatal Health in Zanzibar
Scroll to top